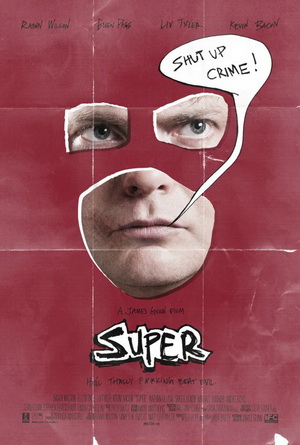 At first glance, Super appears to be another amateur-turned-superhero movie. But if you’re familiar with the works of director James Gunn, you can expect anything but the usual. This is a film that isn’t dramatic as Defendor nor over-the-top funny as Kick-Ass though it echoes elements of both. Super, for better or worse, separates itself far from your standard superhero movies.

Frank D’Arbo (Rainn Wilson) has a warped sense of the world in that the only two things he values are his wife Sarah (Liv Tyler) and the sense of justice. When his wife leaves him for strip club owner, Jacques (Kevin Bacon), Frank loses control of his life. Sensing that Sarah is being taken advantage of for sex and drugs, Frank takes a supposed sign from God and the Holy Avenger (Nathan Fillion) to become a superhero and defeat Jacques to reclaim his woman. He becomes the Crimson Bolt, a character with a patchy costume and a wrench as his weapon. His name is spread through town as he viciously beats up pedophiles, drug dealers and people who cut in line. And by ‘beat up’ I mean he whacks them so hard in the face with a wrench that it most likely either killed them or cracked their skull open. Frank’s insane behavior soon attracts Libby (Ellen Page), who is just as screwed up and desires to be his sidekick. From there the film turns into a brutal free-for-all of violence, sex and some of the most disturbing imagery ever put to film.

I enjoyed Super for what it was: an anti-hero film. It isn’t that Frank turns into a villain towards the end or that he ultimately ends up losing, but how he goes about becoming a superhero. Audiences are use to rooting for the underdog who summons courage to take on evil. While that is Frank’s desire, he goes about it the wrong way and affects Libby’s sense of crime-fighting by inspiring fits of rather graphic violence. It was almost as if half-way through the film the writer decided to make the character more like Punisher. By the end, Frank goes from local superhero taking on thugs to a one-man army waging a bloody war against a syndicate. What makes the film so interesting is that even though there is a happy ending, you’re still not sure if you want to root for Frank. He saved the day and all, but this is clearly a man with severe mental problems or, at the very least, a dark utilitarian method of justice.

Be warned, however, this is not a film for the faint of heart. Anyone who flinches at the mere thought of gore, talking vomit or tentacle porn are probably going to hate this movie. I saw this movie as a challenge to the audience to see just how twisted you can warp a superhero’s personality before you stop seeing him as one. Not to mention I find all the weird elements involving Frank’s visions so over-the-top I couldn’t help but laugh. This is a comedy, after all, albeit an odd one with pitch-black humor. If you’ve grown tired of the superhero movie formula, Super is a delightful deviation. Just don’t go in expecting Kick-Ass.