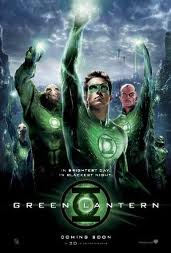 Loosely related to GL Secret Origin, the movie introduces Hal Jordan, the cocky fighter pilot. Green Lantern soldier Abin Sir crash lands on Earth after of unsuccessful showdown with the fear entity known as Paralax. Before he passes, his ring is passed onto Hal who soon learns the true power and the lore behind the Green Lantern corps. Meanwhile, doctor Hector Hammond becomes exposed to the power of Paralax and becomes the Earth-based villain until Paralax arrives.

My biggest beef with the film is that it tries to throw WAY too much at the screen and not all of it sticks. This is a movie that wants to introduce Hal Jordan, Carrol Ferris, Hector Hammond, Paralax, Krona, Sinestro, Kilowog, Tomar-Re, the Guardians of the Universe and their home planet of Oa. Why couldn’t they keep the story as simple as Secret Origin and just have Hal fight Atrocitus? That isn’t too say that there wasn’t anything to like about all these elements. The sequences that take place on Oa are beautifully rendered and exactly what I’d want out of a Green Lantern movie. Tomar-Re’s tour, Sinestro’s speech and Kilowog’s training scenes are all great moments. Unfortunately, that’s about all we get to see of Oa. The rest of the time is spent on Earth with Hal battling Hammond and Paralax while trying to come to grips with his dad dying. If these scenes were given time to be fleshed and didn’t feel so forced emotionally, they could’ve been interesting.

Also, I hate to go into fan-boy mode, but there were some moments that, as a GL fan, just didn’t make sense. First off, the main villain Paralax is actually just the Guardian Krona possessed by the entity known as Paralax. This fact is glazed over briefly in the film, but Paralax as an entity is rarely discussed. Anyone who knows anything about Paralax understands that it takes more than chucking an entity into the sun to get rid of it. Perhaps the filmmakers are saving this for the sequel. Also, about half-way through the film, Hal Jordan decides he wants to quit the GL corps…except he still has the ring. Usually when you quit the corps, they take your ring. And if you run off with it, the Guardians have the power to haul your AWOL butt back to Oa (which they clearly demonstrated in the beginning of the film).

Despite my griping, the film isn’t a total failure. The acting is strong by the entire cast, the few Green Lantern moments there were felt exciting and I can’t get over how much I loved the scenes on Oa. But I can’t ignore the faults the film has and there I quite a bit. Looking at this film as a whole, it makes me think of Tim Burton’s Batman from 1989; not quite a good film, but a good start to establishing the character. If there is ever a sequel or another stab taken at adapting the emerald warrior to the big screen, I’d be up for it. But please, Warner Bros, Green Lantern is a space cop so let’s try to make him look like one. Get him off Earth, team him up with the corps and send him on cool intergalactic missions. THAT is the Green Lantern movie everyone wants to see, fans and newcomers alike.