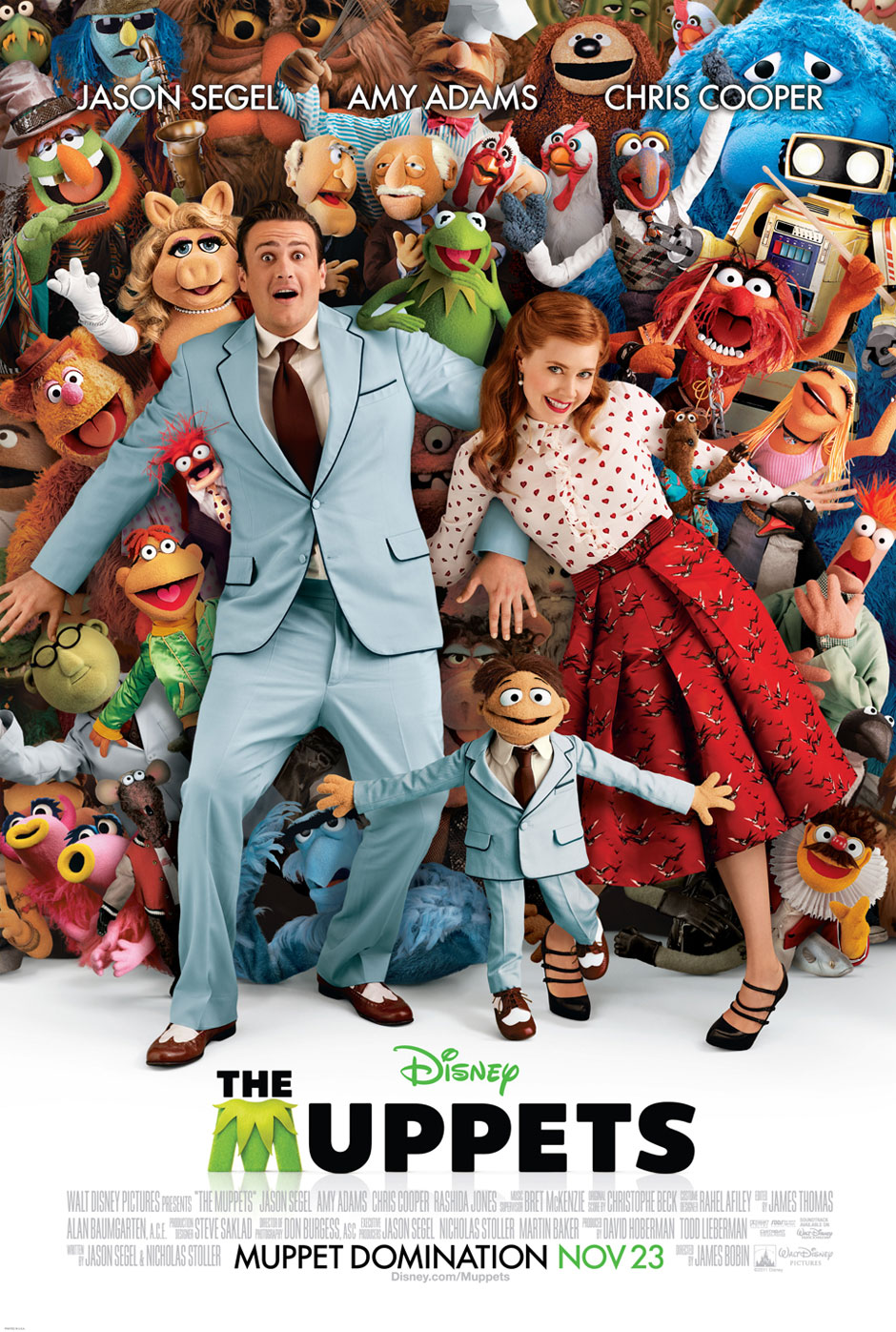 No generation should grow up without experiencing the Muppets. I was lucky enough to catch reruns on television as a child as well as viewing A Muppet Christmas Carol in theater. But it has been over a decade since the last Muppet movie. Are the Muppets even relevant anymore? This film attempts to ask the question if the Muppets can still hold their own in the 21st century. They still can, but as the poster for this movie suggests, not all at once.

Desperate for a revival, Gary and his Muppet-brother Walter seek to reassemble the classic ensemble to save the old Muppet studios. Oh, and Gary’s decade-long girlfriend tags along for a miniscule romantic B-story. The three work with Kermit to round up the old gang for another big show. Their plan is to put on a telethon ala The Muppet Show to raise enough money and save the Muppet studios from an oil baron, Tex Richman. Predictable, yes, but the self-aware nature makes the formula of assembling the old gang much more fun than it should be.

The Muppets contains a heavy level of nostalgia for the early days. The main characters look back on The Muppet Show with profound fondness for the golden era. This is the film’s biggest strength AND flaw. While it was wonderful to see such classic characters return, the meta storyline somewhat hinges the true nature of the Muppets’ already meta humor. One of the best elements of the classic Muppet movies were taking the characters, throwing them into fun situations, throwing in some guest stars along for the ride and occasionally break the fourth wall. This latest film places The Muppets in a weird universe where we are not sure if the guest stars are playing themselves or characters. One of the most confusing roles is for Jack Black who appears as a sponsor for Animal in an anger management program, but later seems to morph into his celebrity persona.

The good news is that the film succeeds at two important parts of being a Muppet movie: the humor and the songs. The musical numbers are well-written and performed with the operatic appeal of a broadway production. The only disappointing part is that the songs peak too early. The opening number and Kermit’s heartfelt ‘Pictures in my Head’ overpower anything that comes after. This is especially disheartening during the the third act in which the actual Muppet Show is revived. It floors me how the movie went to all this trouble to secure all these classic Muppets we haven’t seen in literally decades and doesn’t use them for any classic bits. Where is Pigs in Space, Veterinarian Hospital or the Ballroom skit? Quite surprising that the whole film seems to gush over nostalgia and the only carry-over is the song Rainbow Connection (a great song, but lacks the emotional punch it carried in the first movie).

The Muppets makes an admirable attempt to be something huge. This may be the largest amount of Muppets ever assembled for one movie. That being said, several story elements and characters are shoved aside to make room for all this. As a result, we are not given sufficient time to grow with these character arcs and feel little when they culminate. The good news is that the characters hold their own even with jam-packed script like this. We’ve loved these characters for years and their charm is still alive and kicking. In that respect, the movie succeeds at carrying the Muppets over to a new generation. I just wish it could still do that in a script with breathing room.