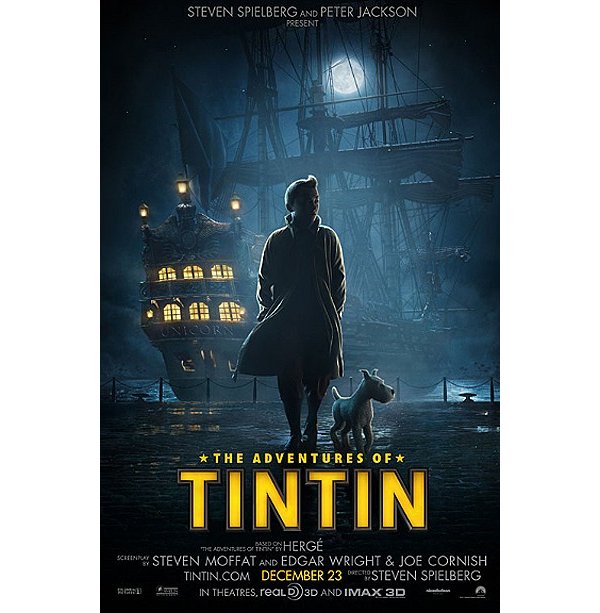 I’m very angry at Steven Spielberg right now after watching The Adventures of Tintin. No, I’m not displeased with his direction nor his decision to use motion-capture CGI. All of that is top-notch. What really has me steamed is that Steven Spielberg didn’t direct an animated feature sooner.

Based on the popular comic from Herge, the film follows the spunky young journalist Tintin (Jamie Bell) and his dog Snowy as they go to great lengths to solve mysteries. When he purchases a rare model ship known as the Unicorn, he is thrown into a dangerous caper involving a long lost treasure. Along the way he teams up with Captain Haddock (Andy Serkis), a drunken sea captain who happens to be a descendant of the Unicorn’s captain. Together, they must stop the evil Sakharine (Daniel Craig) before he finds the treasure first.

All of this seems pretty standard for a McGuffin-driven adventure film and it is. Like all great adventures film, though, the execution is key to the entertainment and that is where Tintin blows all other adventure films out of the water. Just about every element of this film is of the highest quality. The characters are all interesting and likable with plenty for them to do throughout the entire movie. Even Snowy gets a hefty amount of screen time during the action scenes and is seen more as a participant in the story than a mascot. The CGI is incredibly stunning and far from the dead-eyes of other motion capture movies. If James Cameron’s Avatar lead us out of the uncanny valley, Tintin‘s animation launches the audience so far into the realism that movies like The Polar Express and Mars Needs Moms look like unfinished products. It’s astonishing how the characters are rendered with such high quality, but still reflect the classic designs of the original comics. This is that perfect middle ground of animation many of us have been waiting for.

As much as I hate to find fault, the humor isn’t quite up to snuff. The few jokes there are feel somewhat forced and mostly seem to revolve around the bumbling policemen, Thompson (Simon Pegg) and Thompson (Nick Frost). They’re an essential part of the Tintin stories and are supposed to be comic relief, but their efforts aren’t quite as strong as the rest of the film. Also, if you’re judging Tintin solely based on the plot, the story is very basic. The good news is that everything else in the film outweighs these two problems almost entirely. The pacing is tight enough to leave little to no filler and is fast enough to keep even the most attention deficit of viewers entertained.

Spielberg has been a major component in producing animation from An American Tale to Animaniacs. Why did it take him so long to take the plunge into the medium? With his work on The Adventures of Tintin, he has not only proved he can work well with animation, but that he may be one of its greatest directors since Brad Bird. Despite his age, we are witnessing the birth of a new Spielberg with a whole new batch of exciting directorial techniques. For anyone who still believes that animated films are only kid flicks with talking animals, The Adventures of Tintin is a pleasant reminder of all the great things animation is capable of offering. For that reason, I would be a happy man if Spielberg spent the rest of his life directing animated features. He could easily give Pixar a run for their money and up the ante considerably.