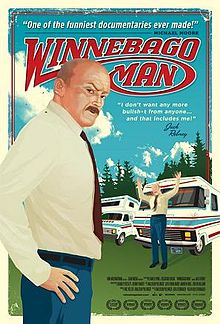 In 1989, Jack Rebney took it upon himself to write and star in an instructional video for a new line of Winnebagos. While filming in the balmy Iowa heat, Jack became frustrated as he flubbed his lines and tried to clear flies from shots. Little did Jack know his outtakes went far beyond the cutting room floor. His exploits were recorded to VHS and circulated throughout the country. Jack Rebney was, more or less, the first viral video star. He was known by many as the Winnebago Man. But what has become of him since?

The filmmaker of Winnebago Man attempts to seek out this star born from rage. This was not an easy task as Jack has pretty much gone into hiding in a manner of speaking. He lives in a secluded forest of northern California. It’s a peaceful place with beautiful trees and gorgeous lakes ripe for fishing. His small abode is equipped with everything he needs to survive. All he needs is his old computer, his books on various subjects and his faithful dog. When we first meet the Jack of the 21st century, he seems quite content with his life. The circulated tape doesn’t seem to phase him and he seems several shades more tranquil than he did those many years ago.

Unfortunately, it was an act. We soon learn that Jack is quite bitter towards his viral fame and has become quite vocal with his rage based in politics. Jack is the grumpy old codger we assumed he may be after witnessing his Winnebago follies. Still, the filmmaker and Jack’s best friend try to push Jack to accept the fact that he has made so many people so very happy. They take him to the Found Footage festival in California where audiences who revel in videos of Jack’s nature culminate. A reluctant and bitter Jack agrees to attend.

This documentary was a fascinating character study of a man’s life. We don’t merely rewatch the footage and take a few jabs at infuriating an old man. This is the story of a unique man who had an incredible job in the television business and wanted to escape. After all he’s seen and been through, he couldn’t take it anymore and became a hermit. Well, as much of a hermit as you could be for someone who still has a phone, television and internet. I admire his spirit to press on as he continues to write a book and a screenplay. Not to mention he is still a hoot to listen to even if most of what he says are rants and obscenities.

There are points where one wonders if the viral videos we consume of people getting hurt or freaking out are in bad taste. People can become distraught, paranoid and even suicidal from that kind of exposure. Jack Rebney, however, you don’t feel as bad for. Considering his biggest claim to fame, the man has done well for himself. He has achieved exactly what he wanted out of life and is comfortable being an angry old man who lives up in the woods. I hope I’ll be that happy when I’m his age. Or, at the very least, still have that kind of drive and energy.