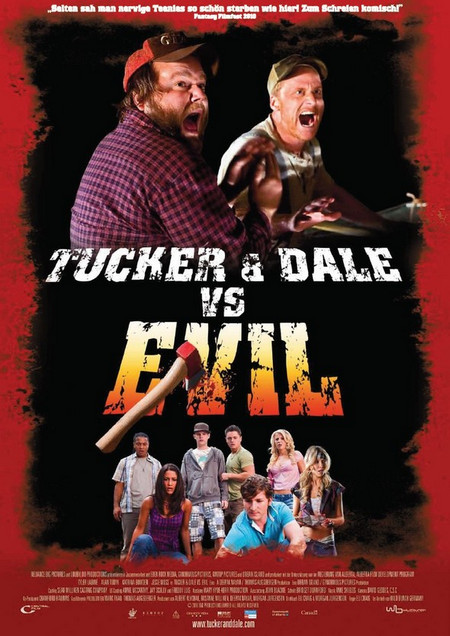 Slasher films depict a world where young people are easy targets for killers. Be they masked knife-wielders or supernatural forces, nobody under the age of 30 is safe. Any young person who saw enough of these movies would be terrified of the world. Tucker & Dale VS Evil attempts to put a unique twist on the genre by suggesting that maybe the stupid young adults are the real danger to a new world of understanding.

Tucker and Dale are two buddies who aren’t so much bumbling as they are clumsy. Think of a much more intelligent version of Laurel and Hardy. They mean well, but are oblivious of their appearance to college kids who have seen way too many horror movies. The camping coeds happen upon the two trying to assemble and enjoy their summer home (presumably the previous home of some crazy killers). Not at all phased by the spider webs, loose nails and remnants of former psychos, Tucker and Dale couldn’t be more happy with their new summer home/project. But the college students, frightened by campfire stories, fear the worst from them.

One mishap leads to another as the two try to act like gentlemen around their neighbors in the woods. After saving one girl from drowning in the lake, her rescue is misinterpreted as a capture and the kids attempt a rescue. Unfortunately, their rescue results in a series of accidental deaths. Thus the film turns into a cross between the Final Destination films and a Looney Tunes cartoon. The college students off themselves in comically absurd scenarios such as accidentally running into a jagged tree branch or tripping into an active wood-chipper. Poor Tucker and Dale are given front row seats to this deadly display of idiocy and understandably flabbergasted at just how to handle the situation.

Though Tucker & Dale VS Evil has a great concept and a gutsy gore level for a horror comedy, the film attempts to pull a twist that turns one of the ignorant young adults into a full-blown villain. One could argue it displays an inner-examination of one’s self  in relation to cultural differences, but it feels a bit forced in the third act. Still, there are enough interesting characters and goofy violence to keep the film fun and different. Some may brush off the writing as sitcom-ish misunderstandings, but how many sitcoms have a punchline where somebody burns to death?

Tucker and Dale are portrayed as the protagonists not just because of the circumstances; they’re just genuinely nice and interesting people. They’re so strong that I’d love to see them in another movie, possibly even a series of films. I hate to go back to the comparison, but these two could really be the Laurel and Hardy of horror comedies. Make them spectators in a series of supernatural murders they get blamed for or have them accidentally incite a war between vampire and werewolves. The possibilities are endless.