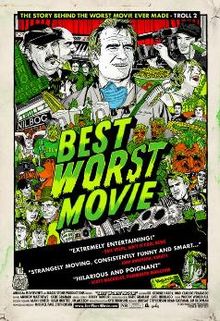 There is an odd charm to the ironic enjoyment of Troll 2. Whether its the monologue about pissing on hospitality or the exaggerated reaction of goblins eating people, there is plenty of unintentional fun to be had with this ridiculous little movie. But what of the people behind the movie? Were they aware of the over-the-top hilarity this film delivered to audiences across America? And, if they weren’t, how do they feel about the fame it has cultivated?

Best Worst Movie follows the lives of the cast and crew several years after the completion of Troll 2. Their post-film paths range from successful living to struggling careers. George Hardy, the actor who played the father in Troll 2,  has a rather successful practice as a dentist. His co-workers and patients love his personality and are well-aware of his acting career. Others like Margo Prey, the mother in the film, are still desperately awaiting their acting careers to take-off and trying to forget that one fateful movie. Further out on the spectrum, cast members have gone on to successful careers in the film industry while others are just trying to maintain their sanity.

Seeing the good and bad in the aftermath of Troll 2 puts an interesting perspective on the success of the film. The only one who seems under the delusion that the movie is actually good is the Italian director, Claudio Fragasso. Here is a man who would make Ed Wood proud in the way he finely crafted his horror masterpiece with haste and determination. If he weren’t as bitter about the reception of Troll 2 being a bad movie, Claudio would be just as admirable. His incredible ego as explained by the cast really puts the movie in perspective. The blame for all of Troll 2‘s sub-par acting, bargain-bin effects and goofy story are all a result of the director. At least he owns up to it as a lesser director would’ve blamed everyone else for the film’s faults.

Throughout the documentary, the true appeal of Troll 2 is put to the test. The cast revels in their legendary stardom at special film festivals, but fail to hold a crowd at sci-fi and horror conventions. The joy and sorrow of the film’s aftermath is fully explored so that at the end of the day you can still laugh at the movie with a little more empathy. Most bad movies don’t get this kind of attention with an adoring fan-base. It’s good to know that some of the cast and crew can appreciate those who found something more in a film that failed to be frightening. They will be remembered not just for the mediocre production they were involved with, but for bringing genuine humor to the lives of many. The fact that they can laugh as well makes the movies all the more enjoyable.