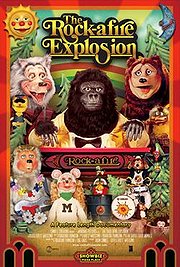 I briefly remember those creepy looking animatronic puppets that would play music at those pizza/arcade chains. They scared the crap out of me with their tacked-on smiles and jerky movements. I soon grew out of the whole pizza party scene and never really tracked the career of the fictious puppet band known as The Rock-afire Explosion. However, a few kids from the 80’s just couldn’t let go of these robotic animals or even just the 1980’s in general.

The Rock-afire Explosion follows the lives of the band’s weird fans and even the creator who still can’t let go after all these years. These are the hardest of the hardcore fans for the animatronic puppet band. Their lives entirely revolve around these characters. They’ve collected all their merchandise, copies of the robotic characters, full-suit costumes and even tattooed characters on their body. The level of fandom present here isn’t too shocking in comparisson to a Trekkie or a Macintosh fanatic, but the filmmakers don’t pull punches when it comes to the personal lives of these people.

These are real people with real problems. They have bad habits and tragic moments not too different from any other person. Sure, their obsession with Rock-afire is pretty close to the point of making them appear unstable, but when you hear about their lives, it makes them more human and made me a little sympathetic towards their fandom. Granted, this is childhood nostalgia, but if your life seems down, a little nostalgia eases the pain.

The saddest of the bunch is the creator of Rock-afire Explosion. His choice to not sell his characters to Chuck E. Cheese ultimately doomed the franchise and his studio now lays in a delapitated state (literally). He is now the only man present in his decaying studio filled with melting plastic and dirty meeting rooms. If it weren’t for the creator selling robotic lessons online, his life would appear to have no hope left. Thankfully, the film has a happy ending as the creator and his fans are doing quite well for themselves.

Technically, the movie is quite low-budget, but makes due with what it can afford. Despite the 4:3 aspect ratio, the wealth of Rock-afire Explosion material, including press footage, enhances the prescence of the animatronic ensemble. You really start to get an idea of what it was like to be a kid during that wonderous age of the 1980’s and not just hearing about it from a bunch of talking heads. The most traumatic of these videos, at least for the fans, would have to be the dissassembly video in which the characters are taken apart and destroyed for the new wave of Chuck E. Cheese.

While the creator is still hanging on to his studio like the business-equivilant of a hoarder, he is quite confident and does well with his robotic tutorials. One of the fans started up their own pizza party place to feature the Rock-afire Explosion. I enjoyed that the film displayed how some fandom can lead to some creepy habits, but ultimately brings some good into their lives and the lives of others. That studio still gives me the willies though. I wonder if the creator of Rock-afire ever thought of turning it into a haunted house. Those decaying puppets would make mighty fine zombies.