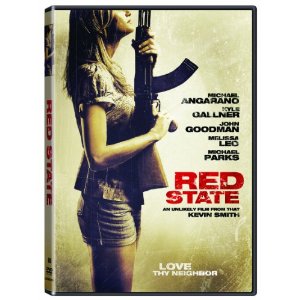 Kevin Smith’s name has always been associated with comedy films. His last film, Cop Out, was such a mess that it made it us question just how detached he had become from his early days of well-written dialogue. Then, in a surprising move, Smith turns around and directs a wickedly dark independent action/horror playing to his true strengths as a filmmaker. While it isn’t his best movie, Red State certainly displays that Smith still has what it takes to make a damn good movie.

Three high school boys living out in the middle of nowhere are so desperate for sex they look up a woman online to screw. The woman they meet, Sarah Cooper (Melissa Leo), seems legit until the boys realize too late that they’ve been drugged. They are held captive by the fanatical local church, Five Points, run by the hate-filled preacher, Abin Cooper (Michael Parks). When the boys start to realize they will soon be executed, they make a desperate escape attempt which attracts local law-enforcement and an ATF strike force led by Agent Keenan (John Goodman). What follows is an intense stand-off with some big mistakes made on both sides.

I found it interesting how the story wasn’t quite so black-and-white. The Five Points church is most certainly insane and evil for what they do, but as the ATF takes over in the second act, you don’t really feel much like rooting for them either. For better or worse, Red State echoes the storytelling mechanics of the Coen brothers and Quentin Tarantino. We get to see multiple perspectives of these characters as they fight for their lives, but there isn’t really a main one we can follow and cheer for. I’m sure there are many who will be turned off by how the ATF is portrayed just as evil as the religious nuts they are trying to stop, but it does make the movie feel more real. Whether that is a positive trait or not is up to the viewer. I, personally, didn’t mind it, but it did make the movie feel quite scattered in focus.

For all its experimenting, Red State comes out as an interesting examination of a sticky situation, but not much more than that. The real strength of this movie is in the performances. Michael Parks carries this film inhabiting the role of an old preacher with a sinister sense of religion. He doesn’t quite channel the fury of Fred Phelps, the leader of the crazy Westbro Baptist Church to which Kevin Smith based the character on, but it works for the film. That being said, it is nice to see Kevin Smith flex his directing muscles with a project so different from his usual affair. I wouldn’t say that this is the triumphant masterpiece of his career, but it is a surprising step in a different direction and a reminder of just how great a director he can be.