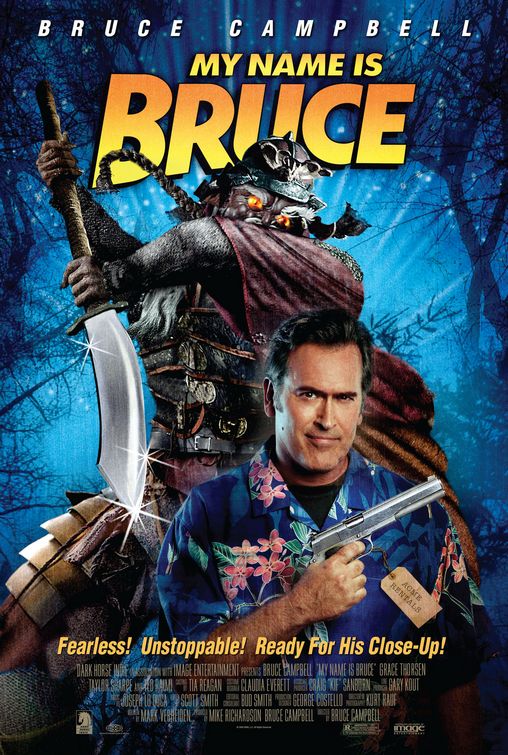 For many B-horror fans, Bruce Campbell has always appeared as the charming big-chinned hero of the genre. Whether he was killing zombies, aliens, mummies, or gypsies, Bruce did it with class and style. But as time has gone by, Campbell’s choice in movie roles has become less than stellar compared to the glory days of the Evil Dead trilogy. However, before he joins the ranks of Steven Segal and Chuck Norris, Bruce takes a step back to direct a parody of himself and what he may become.

Unlike his previous movies where Bruce has appeared as the charmingly macho hero, My Name is Bruce portrays Campbell as a boozing low-life. And not the charming type of boozing low-life; he really goes out of his way to make himself almost completely unlikable in the vain of Bad Santa. And yet there is sill something still charming about that as well. The movie takes place in Gold Lick, Oregon where a graveyard of Chinese railroad workers holds the mythical monster, Guan Di. When some horny teens steal the sacred emblem that keeps Guan Di sealed, the evil Chinese monster is unleashed on the town. According to the movie’s legend on this monster, he is the guardian of bean curd and takes revenge on the white people whose ancestors did save the Chinese workers. As far as movie monsters go, Guan Di isn’t very threatening in the fact that all he really does is swing a giant blade. But he rarely ever misses. Every time Guan Di swings that blade, he cuts something off and it’s usually a head. The sole survivor of Guan Di’s introductory assault on some horny teens is Jeff, an obsessed fan of Bruce Campbell. So obsessed in fact that he actually believes Bruce Campbell can save his town from Guan Di.

So after an unsuccessful pitch from Jeff to Bruce for him to save his down, his plan B is to knock Bruce out and kidnap him. How a cute plea for help turned into breaking the law so fast just astounds me. Once Bruce is brought to Gold Lick, he is convinced that this is actually a movie setup by his agent and attempts to play the part of the hero while still complaining as if he were on a set. Of course, Bruce takes advantage of the small town by acting like a charming, but aged, jerk. But once Bruce witnesses Guan Di smashing somebody’s head in with his blade, Bruce not only comes to his senses, but turns into the biggest jerk ever while fleeing the scene. How big of a jerk? He accidentally shoots a couple of people and steals a car from an old lady while tossing her kenneled cat out the window. As expected, Bruce has the moment of realization where he has to go back and save his biggest fan Jeff. However, it doesn’t exactly mean that Bruce learns a lesson to turn his life around. Instead he uses a tad of common sense when he goes into hero mode. And the ending, while appearing expected, is saved by two much better false endings.

Make no mistake, however, My Name is Bruce is not a perfect movie. There are a few plot points that are a tad farfetched such as how Jeff resorts to kidnapping Bruce or how the town actually believes this guy will save them all. The acting is typical of B-movies and TV movies. Some actors are decent, others try to hard. The stand-out actor here is clearly Ted Raimi who plays the roles of Bruce’s agent, the Gold Lick sign painter, and the crazy old Chinese man. Ted doesn’t really melt into these roles, but he plays them with enough glee to make you smile. Many may be displeased by Campbell’s performance as a jerk, but I thought he did great job at portraying an aging actor turned douche-bag. I’m so use to seeing him as the charming hero that watching him booze it up in a trailer while he wallows in his failures holds an interesting appeal. The most humorous part of the movie is undeniably the irony of Bruce’s real life acting career. The movie features Bruce starring in another made-for-TV sci-fi movie that seems so real it’s creepy. And when he is commissioned for two sequels to that movie, you really feel his pain. But also you laugh at the same time…while tears roll down my cheeks.

Despite its low-budget and actor limitations, My Name is Bruce is delightful surprise. The monster is pretty cool, the comedy has more hits than misses, and it’s Bruce-freaking-Campbell in a movie he directed. However, if you’ve never seen a Bruce Campbell movie, chances are you’re really not going to like the guy in this movie. It’s more-or-less a Campbell fan movie.